OFF Episodes in Parkinson's Disease

OFF EPISODES MANIFEST AS AN INABILITY TO RESPOND PROPERLY TO LEVODOPA TREATMENT AS WELL AS A LACK OF ACCESS TO MOTOR FUNCTION DUE TO A DEPLETION OF DOPAMINE LEVELS IN THE BODY.

OFF episodes are thought to occur when brain dopamine levels fall below a critical threshold to sustain relatively normal motor function, or ON. OFF episodes can be unpredictable or predictable and in some cases episodes may be preceded by non-motor symptoms such as pain, tingling, sweating, and anxiety, which can alert patients that motor-impairing symptoms are returning. OFF episodes are generally categorized into the following four main types, as shown in the below diagram, which illustrates one patient’s response to levodopa over the course of a day. 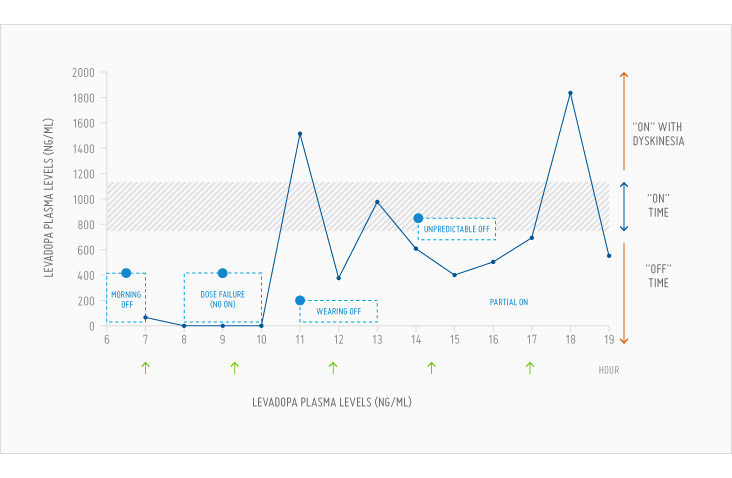 Morning OFF episodes occur after patients take their last dose of dopaminergic drugs late in the evening prior to retiring for the night. After a full night of sleep, the patient has little or no dopaminergic drug left in the brain. As a result, the patient is considered OFF and has only a small reserve of dopaminergic stimulation. This results in a significant delay in the response to the first morning dose of levodopa or other PD medication, which is also referred to as morning akinesia. This delayed response is unpredictable, and a PD patient cannot rely on the onset of levodopa in the morning. Impaired gastric motility and erratic gastric emptying in PD patients generally delay levodopa absorption or cause it to not occur at all. Morning OFF episodes are considered the most debilitating OFF episodes and the most difficult to treat and to convert to ON.

(2) Delayed ON, Partial ON or Dose Failure

Delayed ON occurs when a patient takes a dose of levodopa, but does not achieve ON in the usual time frame. To the patient, it appears that the dose has not worked. A partial ON occurs when a patient experiences some improvement in motor function but not enough to be able to perform their daily activities. A dose failure occurs if the patient does not experience any response to the dose of levodopa. A delayed ON, partial ON or dose failure may occur for a number of reasons. Oral delivery of levodopa requires the drug to be actively absorbed through the gastrointestinal tract into the blood stream. The gut contains dopaminergic neurons that can become depleted of dopamine. When this occurs, the gut fails to function normally, resulting in delayed, limited or no absorption of the dose. These OFF episodes are also difficult to convert to ON and do not respond to adjunctive PD medications.

(3) End of Dose Wearing OFF Episodes

End of dose wearing OFF episodes are the most common type of OFF episodes. With PD progression, levodopa’s effect decreases in duration. Eventually, levodopa is not fully effective between doses, which causes a patient to go OFF ahead of the next levodopa dose. These OFF episodes occur in a relatively predictable fashion following each dose of levodopa.

These OFF episodes occur without warning when the patient is in the ON state and at unexpected times. The goal of levodopa therapy is to maintain a constant blood level of levodopa that is expected to result in a constant supply of levodopa to the brain and, therefore, a constant level of dopamine and dopaminergic stimulation. However, the brain does not utilize dopamine at a constant rate. Changes in activity level or changes in mood such as agitation or anxiety result in an increased use of dopamine. The brain then depletes the reserves of dopamine, and more time is required to rebuild that dopamine deficit. As a result, a patient in the ON state can unexpectedly and suddenly turn OFF when their normal PD medications are typically effective.

OFF episodes can have a tremendous negative impact on patients’ daily lives. The potential for unexpected loss of motor function or the unpredictable onset of benefit of one’s PD medications can result in patients’ avoidance of certain social settings and hinder performance of simple daily tasks such as eating, bathing and dressing. Further, a patient’s varying consumption of dopamine from variable “daily stresses” as well as the loss of dopaminergic cells, exacerbates the frequency, duration and severity of OFF episodes. As the disease progresses, patients are often forced to leave the workforce and become increasingly dependent on caregivers. In a survey by the German Parkinson’s Association, it was found that OFF episodes and specifically, early morning akinesia, or morning OFF episodes, were the two most significant symptoms suffered by PD patients and the only two symptoms reported as “very important” by more than half of the patients surveyed. Other studies have shown that all types of OFF episodes have a significant negative impact on health-related quality of life in PD patients.